You are here:   Home > All > Fresh peaches become savory delights 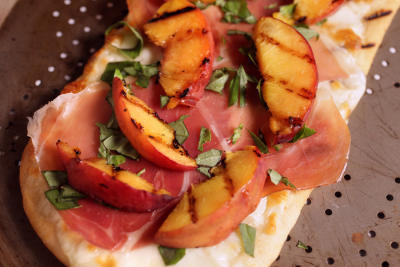 You bite into a ripe peach. A drop of delicious juice spills over your lips and traces a wet, sticky trail down your chin.

But that’s a fresh peach, consumed au naturel. What about cooking with peaches? What about using them in savory dishes? Are they still as amazing then? Of course they are. Peaches are still peaches, even when placed on top of a pizza.

Using a recipe by Martha Stewart, I grilled the sliced peaches before using them as a flatbread topping. I knew that would caramelize the fruit, making it sweeter, but what I did not anticipate was how just a couple of minutes on the grill would give the peach a smoky flavor.

And all of this goodness was perched on top of a grilled pizza crust, or at least it would have been if I had followed Stewart’s recommendation. I wanted something slimmer so the other flavors would stand out more. I wanted to use a grilled flatbread, but just at the critical moment I couldn’t find a suitable version at the store.

They were great. The distinct taste of the naan added one more complementary taste to the toppings, but to be perfectly honest a pizza crust would be just as good, or a flatbread or even a pita.

Salt brings out the sweetness and tempers the acid in many foods including tomatoes (and even peaches). Just a bit or two of salt turns these two competing fruits into the best of friends.

And that is when I saw a recipe for a fresh peach cake. The recipe is by Ina Garten. It is more of a coffee cake than a cake cake. The batter has sour cream in it — I could just eat the batter all day — along with all the other ingredients that make cake so delectable: butter, sugar, eggs, vanilla and flour. Then it is topped off by a combination of cinnamon, sugar and pecans.

1. Preheat oven to 350 degrees. Grease a 9-inch square baking pan. If you use a smaller pan the batter will overflow it while it cooks, so place it on top of a baking sheet with a rim or a larger pan.

2. Using an electric mixer with the paddle attachment, beat the butter and 1 cup of the sugar on medium-high speed until light and fluffy, about three to five minutes. With the mixer on low, add the eggs, one at a time. Add the sour cream and vanilla, and mix until the batter is smooth.

3. In a separate bowl, sift together the flour, baking soda, baking powder and salt. With the mixer on low, slowly add the dry ingredients to the batter and mix until just combined. In a small bowl, combine the remaining ½ cup of sugar and cinnamon.

5. Bake the cake for 45 to 55 minutes, until a toothpick inserted in the center comes out clean. Serve warm or at room temperature.

1. Cut four of the peaches and two of the tomatoes into quarters and put in a food processor or blender. Add the sweet onion and vinegar and process until smooth.

2. Chop remaining peach and tomato. Stir into pureed mixture. Season with salt (if it tastes bitter, the salt will add sweetness) and white pepper to taste. Chill one hour.

3. Meanwhile, combine cucumber, yogurt and the 2 tablespoons chopped fresh chives in a medium bowl. Season with salt and pepper to taste. Cover and chill one to 24 hours (chilling can dull the seasoning, so you may need to add more salt and pepper before serving).

4. Ladle gazpacho into bowls. Spoon cucumber mixture over gazpacho. Drizzle each serving with about 1 teaspoon olive oil and serve immediately.

1. Heat a grill or grill pan on high heat and grill pizza crusts, flatbreads, pita or naan until grill marks are dark. Set aside and grill peach wedges until caramelized, about two minutes per side.

2. Preheat oven to 400 degrees, or lower grill temperature to medium. Spread cheese on grilled pizza crusts. Bake or grill (covered with a lid) directly on grates until cheese melts and is bubbling, about eight minutes (time may vary slightly if grilling). Remove from oven or grill. Top with peaches, prosciutto and basil. Drizzle with oil.

1. Wash the peaches and cut in half to remove the pit. Slice each half into two equal wedges and place in the bottom of a large glass jar. Add sugar, cloves and allspice before adding the bourbon. Seal tightly.

2. Place out of direct sunlight and let steep for seven to 10 days. Once infused, strain the bourbon and discard the peaches and spices. Finished bourbon will keep indefinitely in an airtight decanter or jar.